I cringed when I saw the message pop up. “Do you have the presentation done yet?”

There wasn’t a set deadline, other than “soon.” The project was certainly important, but I was buried in the tyranny of the urgent.

Every time I sat down to do the work, something came up. A phone call, a text message and a person dropping by my desk. An email, that left ignored, was likely to quickly snowball into 10 emails that would take far longer to deal with than if I just took 60 seconds to respond now. Five minutes later, a meeting started. Then another one was scheduled on my calendar after that.

I failed to meet the expectation. I felt worthless. I wanted nothing more than to crawl into a hole and not come out. Or better yet, to wake up and find that it was a dream and that the work actually had gotten done.

Does this sound familiar?

Whether people admit to it or not, everyone gets bogged down at some point.

It’s normal to have busy seasons where there is fire drill after fire drill, and everyone triages work until things settle back down.

The problem comes when a chaos level of busy and crunch time mentality becomes the new normal.

A study conducted by Workfront revealed that 80% of marketing professionals feel overloaded and understaffed. The number two specific problem identified was “Juggling all your work to get it done in a 40-hr week.”

While this study was released two years ago, feeling overworked and overwhelmed isn’t limited to marketing professionals and hasn’t slowed down.

I’m not alone in having these moments. Neither are you.

20% don’t feel overloaded and understaffed. With the right tools in your arsenal, you can be one of them. 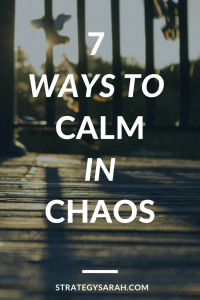 7 ways to calm in chaos

1. Set clear priorities for yourself.

Set priorities at both a macro level, and on a daily basis.
Recognize the priorities of those higher up than me.
Set priorities with peers and those below me.
Start each day with the Daily 6.

2. Set clear priorities with others.

In this situation, I have not only a boss with expectations, but many co-workers who rely on my work and have expectations of what I deliver. To set myself up for success, I need to clearly communicate with all of them.

4. Use time blocking to avoid interruptions.

A research study by Gloria Mark from the University of Irvine has shown that it takes an average of 25 minutes to get back on track after being interrupted. While we can’t always eliminate interruptions, we can focus our time into blocks, and turn off as many distractions as we can. It’s okay to turn off email and messages for a period of time. For critical work, it may make sense to physically move somewhere you are less likely to be interrupted.

A don’t do list is simply what it sounds like. A list of things you are not going to do. This can be items that you’ll never do, or items that you won’t do right now or in a specified period of time.

Similar to making a don’t do list, make a conscious effort to avoid shiny object syndrome. Distractions will occur, and many of those distractions have potential to be worthwhile tasks and projects. But if they aren’t what’s most important right now, they should be intentionally set aside – either for later or for never.

7. Know your personality and personal weaknesses.

My failures are almost always boil down to overcomplicating something. This is usually because of fear or perfectionism, and typically results in procrastination. Because I know this, I can plan ahead, recognize when it’s occurring and set

On my presentation, I simply responded to the message with, “It’s in progress, and I have this afternoon blocked off to finish it.”

I did have some time that afternoon blocked to work on the presentation, and I quickly re-prioritized my afternoon and blocked off a whole lot more time. The question posed to me prompted me to reassess my priorities for the afternoon, set expectations about when I would have the presentation completed, block my time and ignore everything else that came up.

The reality is that I had accomplished more than I was giving myself credit for. While I could have been more proactive in learning and setting expectations on this particular project, many of the urgent tasks I was on were important. I took the opportunity I was given to reset expectations, reset my focus and get the work done.

Having the framework above to reference allows us to quickly bring a sense of calm back to the chaos – both when there is literal chaos around us and chaos in our brains.

Are you overwhelmed by a flood of info coming your way? Download the "How to Defeat Information Overload Checklist" and stop the madness today!