Am I the only one that engages in productive procrastination?

Productive procrastination: Those times you have a priority and important task or project to work on, but you’re not feeling it, so you pick another task from your list and work on something else.

This flies in the face of a rather large percentage of productivity wisdom that advises to: My big rebellion in life these days is to finish a report when I should be finishing the dishes. Or working on one project when another has an earlier deadline. (Or maybe eat a whole big bowlful of ice cream after the kids are in bed.)

I had another big project slated for this time slot. I’ve tried working on it, and it’s just not flowing. So I switched gears to write just a wee, quick little blog post on productive procrastination.

How does productive procrastination increase productivity?

By using the procrastination time to focus on another item already on the to-do list, rather than on mindless activities that won’t matter.

Writing a blog post instead of working on my big project is far more productive than trolling Facebook yet again, playing iPhone games, or watching mindless TV.

The biggest risk in productive procrastination is not ever getting to that big project. My thoughts on that: If something is that big of a mental hurdle, is it something that I really should be working on?

Sometimes, yes, there are things that aren’t so fun that just have to be done. Other times, it’s a sign that it’s time to take a step back and re-evaluate if a task or a project is truly necessary, or if it should be delegated, delayed or dropped.

In the meantime, work on another productive task, give yourself some mental space, and come back to that difficult task or project a little bit later.

When it comes to small business and entrepreneurship, there are very few things that you truly have to do. If it’s not working, change it.

My conclusion: Productive procrastination is still productive. Make the most of it.

And now back to the project…

What’s your experience? Does productive procrastination help or hurt?

I am the queen of not doing something if I don’t think I can excel or finish well. This includes a broad spectrum of activities: high school calculus (yes, really), exercising, reading a good book, having friends over, work and business ventures, and activities with my husband and boys. This simple, rather obvious concept –…

You can’t run before you can walk. You can’t leap up a full flight of stairs, well, ever. But you certainly can’t take the stairs two or three at a time before you’ve mastered one. I know, this is shockingly new information. I so want to skip ahead and be farther along than I am… 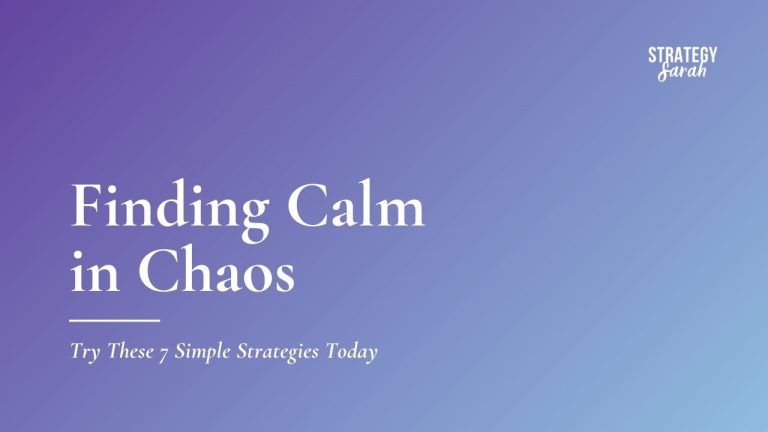 Try these 7 strategies to practice the essential life skill of staying calm in chaos. As a working mom and career woman, I use one or more of these daily!

A few weeks ago, I attended my first conference since I left the corporate world. I signed up for the World Domination Summit on a whim. I first heard about WDS two or three years ago from J.D. Roth, founder of GetRichSlowly.org. To be honest, I thought the whole thing sounded a little hokey, and over-the-top…