“You really should be considering asssistant-level positions,” the recruiter stated.

“Well, you’ve been out of the workforce so long that you’ll likely need to take a step down to get back in the game,” she stated.

Thus went my first job search conversation after I had been “out of the workforce” for a whopping 18 months. The majority of those 18 months I was freelancing part-time, and my resume showed zero gaps.

Was this for real?

Had my brain atrophied in the months I was working part time? Or was it simply the penalty I was required to pay since that time was a voluntary departure to spend more time with my newborn and toddler?

And what about those Canadians and Europeans for whom my time out is simply called “maternity leave?”

Needless to say, I did not work with that recruiter. A few months later, I found a role and picked my corporate career back up at roughly the same place I had left it.

Did I pay a penalty for those missing months? Absolutely.

Does it infuriate me? You bet.

Would I give up those months to go back and do it differently? Nope, not a chance. Fast forward a few years, and I’m on the other side. There are three of us, all females, discussing some upcoming resource needs.

“Should we consider Jane for this special project?”
“She’d be great at it, but she is just coming back from maternity leave. Do we want her to feel like she has to take it if it’s offered? We don’t want to overwhelm her or put too much on her plate.”

Here we were, a group of women, limiting our colleague because of her motherhood status.

The very thing I despised others doing to me, I was perpetuating. After too much time, we stopped and looked at each other and said, “This is crazy. We’re making these assumptions with the best of intentions but she is the only one who can decide if it’s the right move. Who are we to take he choice away from her, no matter how well intentioned?”

In the day and age of #metoo, wage transparency and leaning in, it’s worth taking a critical look at how our current culture has shaped and impacted us. It’s also worth looking at how we may unconsciously be part of the problem.

For those of you just starting out careers, learn from those who have gone before. Be thankful for the time you live in. Continue to stand up for yourself and for the rights of those around you.

For those of us mid-career, let’s be honest about the influences, factors and decisions that led us to where we’re at. We can’t go back and change the decisions we’ve already made, but we can consciously think through our actions moving forward. We have the opportunity to make a difference both for ourselves and those who come after us.

Those of you further along in your career, you are in a place to make a huge impact. Continue to set an example and mentor those of us coming behind and alongside you.

Moms: Don’t undervalue yourself, and don’t listen to those who try to tell you that you aren’t worth it.

Managers: Don’t assume you know what anyone on your team wants. If they’ve earned an opportunity, present them the option and let them make the choice.

Together, let’s make the world a better place. 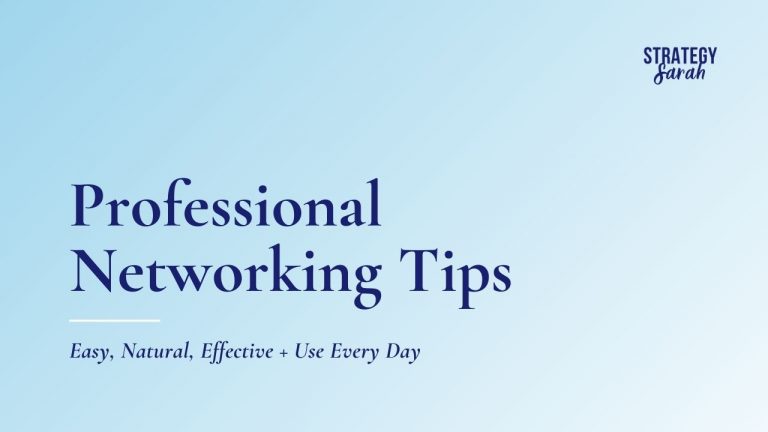 A case study plus four easy professional networking tips that are effective, natural to our personalities (even for introverts!), applicable to both daily life and business.

I had a nagging, annoying problem with my website. I spent 20 or 30 minutes trying to fix it one day and couldn’t. I then proceeded to get interrupted, ignore it and forget about it. A few weeks later, the issue popped up again, and I’d had it. I momentarily thought about posting a rant…

My first “real” job post college graduation was in retail management. If there’s any place that desperately needs keystone habits and clearly defined systems and routines, it’s a retail establishment with primarily low-wage and high turnover employees. I was an assistant store manager for a now-defunct mid-level retailer. (Anyone remember Mervyn’s? If not, think of…

A few years ago, I did a freelance project that involved working with craft bloggers and reviewing their content and products. I can’t tell you how many times I read something along the lines of: “This is a quick project. I did it while watching Downton Abbey, so it’s easy.” “These cookies are easy to…