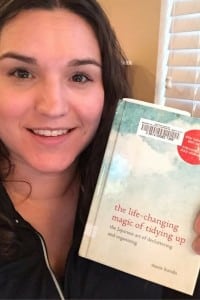 First of all, I’ve had a few moments of feeling like I’m the only person on the planet that hasn’t read The Life-Changing Magic of Tidying Up by Marie Kondo. That may be a slight exaggeration, but seriously, so many people have read it!

I’ve read several articles and blog posts, and while it sounded intriguing, I definitely wondered if I really needed to read it after I got all the basic tips from summaries.

My decision: If I could get it from the library, it was worth reading. I’m pretty sure the waiting list was around 200 when I put in my request, but it came up much sooner than I expected based on those numbers. Either that, or I’ve been busy enough that I have no concept of time (probably a little of both).

RELATED: Five simple reading strategies and where to acquire books 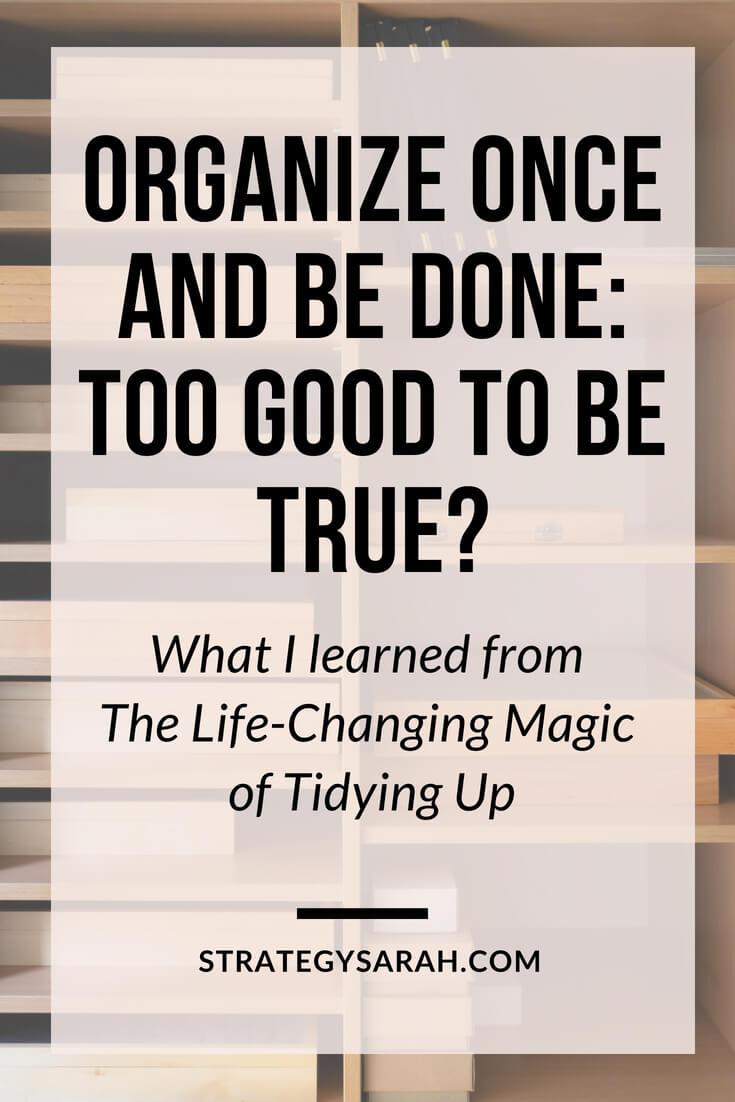 If you haven’t read The Life-Changing Magic of Tidying Up, the basic premise is this:

Organizing (or tidying, as Kondo calls it) is a skill to be learned, but one that very few people are actually taught. And those of us who have been taught, or self-taught, are going about it all wrong.

She hypothesizes that once you learn how to tidy properly, you’ll only have to do it once in your life. Fairly radical. She also claims that she’s never had a client relapse.

Decide what to keep, and decide where to put it.

Then you’ll never need to tidy again. Simple and straightforward.

The emphasis on what to keep, rather than what to get rid of is unique. She talks about choosing based on what “sparks joy” when you pick it up. She takes a fairly broad definition of sparking joy – for example, a toothbrush sparks joy because it keeps your teeth healthy and prevents disease.

She does get a little out there, with her take that possessions and dwellings have feelings and should be treated accordingly. A little crazy. However, maybe it’s not so much of a stretch. I live with toddlers, so we regularly deal with possessions as if they were animate objects with feelings. And pretty much every children’s book, show or movie has at least one animated character that doesn’t actually have a personality or feelings.

I was expecting to think she was crazy for that part of the book, but honestly, the woo woo feelings part was more understated than I expected based on reviews. Maybe I’m more in tune with my inner woo woo than I realized. I’ve heard several people talk about how she talks about socks needing to rest, and while she does say that, her rationale made sense. The logic is that socks folded over on themselves are stretched out and that causes the socks to deteriorate faster than they would laid flat and then rolled together. Fair enough.

Can you really tidy once and be done?

While Kondo speaks of the importance of tidying all at once, she also says the one-time process takes an average of six months. Of course, the Type A in me immediately things, “Well, if she says all at once, then I should get it done in a week!” Hmm…maybe that’s part of my problem?

My biggest (but still minor) complaint about The Life-Changing Magic of Tidying Up is that Kondo spends a great deal of focus on clothing, papers, and then has a very broad category of “miscellany” that includes pretty much all household items. My kitchen and garage have far more clutter and disorganization than my clothing and papers.

Once you ponder her claim that tidying is as much a mindset shift as a physical act, and the fact that she advocates spending six months tidying, her claim of no relapses makes more sense. If I were to spend six months straight systematically deciding what to keep based on what sparks joy, and then designating a specific home for each item, that would likely be long enough to truly go through all the items I own and fully curate them, as well as enough time for the new mindset to become a fully ingrained habit.

With roughly six weeks until we move, I’m going to try a pass at tidying. The garage is clearly not my realm, so I’ll leave that one alone, but I’m committing to tackling my paper clutter and my kitchen.

Does clutter plague you? Have you tried Kondo’s method of tidying with any results?

As a busy working mom, I’m always looking for tips and ideas for awesome time management books to increase my productivity and well being.

I love to read, and read (more than) my fair share of beach read, fluffy fiction. I have an equal love of non-fiction in the business, productivity, and time management realm. The case studies and stories of people’s lives are so fascinating! I love to learn from both the official practical tips, formal studies and life stories shared. 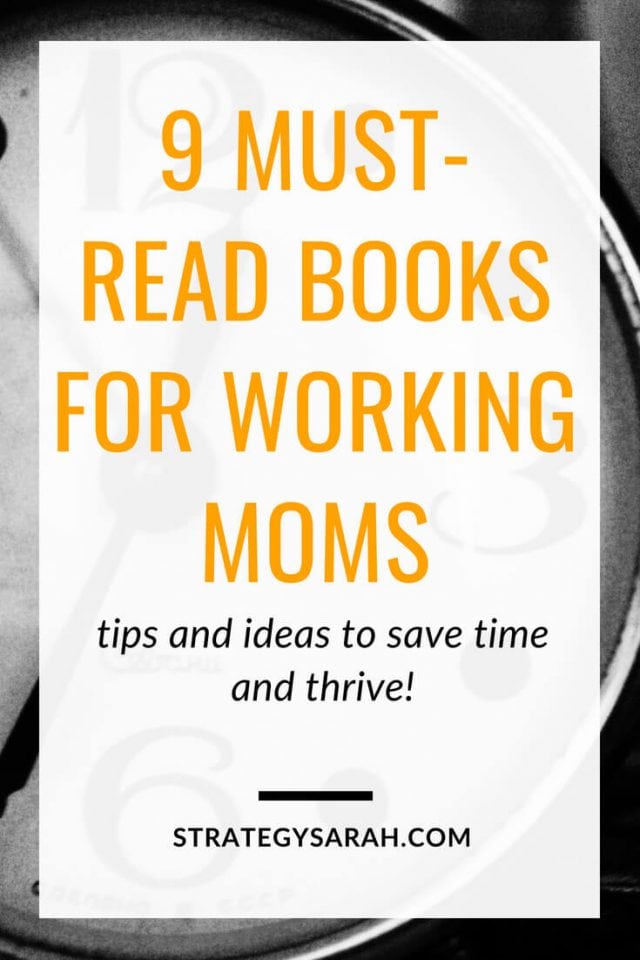 These nine books from experts on time management and productivity are favorites that I reference often. There’s a great balance of quick reads (because we are busy moms!) with practical tips, more in-depth research studies and commentaries, and food for thought.

Tell Your Time is short, but backs a serious punch. Amy’s no-nonsense, straightforward manner is fantastic. A practical, quick-to-implement read at $2.99, this is my number one pick if you had to choose from this list. If you’re short on time to dedicate to reading and want a simple, practical, actionable steps, start here!

2. Eat That Frog by Brian Tracy

Eat That Frog “provides the 21 most effective methods for conquering procrastination and accomplishing more.”

“Working hard is important. But more effort does not necessarily yield more results. ‘Less but better’ does.” <– This.

4. 21 Days to a More Disciplined Life by Crystal Paine

Paine was one of the first bloggers I followed consistently, and her growth as a blogger, business owner and person has greatly inspired me over the last eight years. 21 Days is a straightforward workbook to help focus, prioritize and gain discipline.

My favorite parts about Overwhelmed are the number of research studies and thorough approach. Schulte’s background as a journalist shines in the best of ways.

The endless energy that Turner has to fit so.many.things into her fringe hours is impressive. I admit to feeling daunted by just how much she fits in her days. At the same time, she talks about how much she truly enjoys all that she does. The concept of fringe hours, and fitting important, soul-filling activities into pockets of time is fantastic. Reading this book inspired me to be more intentional about using small pockets of time for intentional reading (love my Kindle app!) rather than mindless Facebook or web surfing.

7. Getting Things Done by Brian Allen

The GTD methodology has a near cult-like following. While I’ve incorporated many of the ideas from GTD, I have never been successful at implementing the full process. My “GTD Lite” process has served me well without overcomplicating.

8. I Know How She Does It by Laura Vanderkam

I love, love, love Vanderkam’s no-nonsense approach that of course working moms have enough time to do it all – as long as we prioritize what “all” is to us.

Vanderkam’s other books, Off The Clock: Feel Less Busy While Getting More Done and  168 Hours: You Have More Time Than You Think are also awesome reads.

Margin was on a book list for one of my college classes. I’m sure I read the required excerpt, but it was only a year or two ago that I made it through the entire book. This one is more academic than some of the others (read: not a quick read, but worth it to go in-depth).

Adding any one of these nine time management books for working moms to your reading list will give you awesome tips, ideas and thoughts to better manage your time and thrive at home, work and play.

Why yes, these links are affiliate links, which means that if you make a purchase, I get a small commission. Your price remains exactly the same. You pay the same price and I get paid? That’s a no-brainer, right?

Released in 2015, The Fringe Hours* by Jessica Turner is a refreshing quick read. Jessica takes a no-nonsense approach with the mentality that of course you should take care of yourself. She also advocates that there is plenty of time in the day for all of us to practice self-care – in the fringe hours.

As someone who has spent way too much time dwelling on whether or not I’m being selfish with my need for space and alone time and hobbies, I needed to hear the message Jessica shares. Somehow she managed to say what I’ve felt but couldn’t manage to put words to.

Yes, it is important to take care of ourselves so that we can live take care of others. And we have the time to do so – even if some of us have to be more creative to find that time. I’m still learning to prioritize what recharges me, especially when that isn’t something I can quantify as productive.

“Unreasonable expectations for what we can accomplish in a given period of time set us up for failure…You know what your limits are. Embrace those limitations not as something negative but as realistic opportunities to do what only you can do.”

One of my favorite examples of prioritizing time was that of doing a craft project while laundry was piled up and the dishes weren’t done. In my own life, keeping chores done enough, but not perfect, is one of the only ways to get the time I need for activities that re-charge me.

A great tip for extra reading time: read a magazine while drying your hair. I’ve read while drying my hair for years, although I usually read books rather than magazines. Kindle books are super easy to read. If you’re reading a print book it can get a little tricky to find weighted items to hold down the sides of the pages in order to read hands-free.

I highly recommend you grab a copy and read it in your #FringeHours! Check out more good reads here.

*Disclaimer: Yes, this is an affiliate link. I also received a complimentary (that’s free) advanced readers copy of the book in exchange for an honest review. All thoughts and opinions are my own. I would gladly pay full price for this book.