Are you a person who doesn’t mind hundreds (or thousands) of unread emails in your inbox? Or do you prefer to keep your inbox pristine? If you prefer it pristine, do you ever find it hard to keep that way? Me too.

I know, you’re shocked. I was also. I’m a fairly organized person, and am generally someone fairly on top of my email organization.

But…it had been a number of months since I had done a thorough email inbox cleanup of my email. It had also been a few years since I revisited the process I used to read, store and organize my email inboxes.

In all reality, I wasn’t that disorganized. I had just let a few things slide and needed to revisit them.

And the best part? The deep cleaning and re-organization only took about 3 hours total, in 30 second to 30 minute increments over a few days.

Ready to experience that same success yourself? Read on… 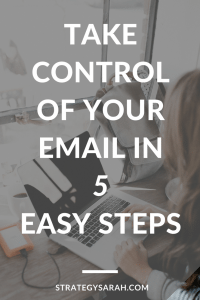 How to (Re)Organize Your Email in 5 Easy Steps

2. Set up and review email folders

Within each email inbox, I have a number of folders to set up to file emails. This can range from very simple to complex, and is one area that I tend to update every year or two, as life and business circumstances change. This round, I simplified many of the folders, and removed several.

In one example, I had a folder for Recipes that I hadn’t looked at or added anything to in at least three years. I currently save all my digital recipes to Pinterest, in Evernote and/or in Plan to Eat. I didn’t even remember that I had a Recipe folder, and I certainly don’t look for recipes there. I reviewed this folder and deleted recipes I was no longer interested in making, or knew I already had saved elsewhere. I then saved the rest to Plan to Eat, Pinterest or Evernote, and deleted the folder once it was empty.

Note: This was a perfect task to do in the limited 1-2 minute pockets of time throughout the day. If I was already near the computer, I quickly went to that folder, saved one or more recipes, deleted and went on. What could have been tedious in one long session went quickly and utilized time that would have otherwise been unproductive.

3. Use Gmail filters liberally and strategically

Almost all of my emails except personal emails are set to skip my inbox and automatically filter into Gmail folders. I had ended up with too many emails that should have been filtered landing in my inbox. I spent some time adding a number of filters, and now only have a few stragglers to deal with.

Action Step: Add filters to keep non-critical emails out of your inbox.

I use Unroll.me, which is a fantastic free service. But I also found that it gave me a false sense of control. I also realized that I very rarely actually opened the daily email digest – which means that all those newsletters and mailing lists that I thought were important enough to roll up, I didn’t think were actually important enough to read.I unsubscribed to a lot more newsletters, and took most other newsletters out of unroll.me so that they would get the attention they deserve.

Action Step: Unsubscribe from email lists you no longer need or use – liberally!

This was the most satisfying step for me, but also the one I recognize as the least important. If you’re skipping any step, I would skip this one. As I was re-doing a number of my filters, I realized I had emails back as far as 2006 that there was no good reason to hang onto anymore – even if I did technically have the space in the inbox.

Now, a few thousand of those emails were in folders that really didn’t matter if they stayed or went. Gmail also has enough storage space that I could have left them for years and never run into issues. But I gained the same huge sense of satisfaction from knowing that I don’t have Nordstrom Rack sales emails from 2008 hiding in a folder as I do from cleaning out the storage shed of never-used items that are hidden from regular view. Yes, it may be a bit of an overachiever, but I’m okay with that.

What is your biggest obstacle to email control? What other tips do you have for staying on top of the email mess?

Have you read David Allen’s Getting Things Done (affiliate link)?  Many tout it as one of the best organization systems out there. I love the idea behind it, but the complexity of his systems overwhelms me. I know that I would only follow through with his suggestions for a week, or a month at most, before it all fell apart due to lack of maintenance.

Haven’t we all done this at some point? We develop a carefully thought out system or process. We spend a ton of time getting it set up. Then it falls by the wayside for one of a million different reasons: needs changed and the system didn’t, technology changed and we didn’t keep up, it was a more complex system than we actually needed, sheer laziness, etc.

How can we know ahead of time what the best digital organization system is – for our personal needs?

The best organization system is the one that you will actually use.

A few years ago, I had to admit that my own information management system had gotten a little out of control. I woke up one day and realized that I had stuff saved in Google Drive, Dropbox, random draft emails (on six different email addresses), in Asana, on scratch paper strewn around my house. I was also taking notes in Evernote.

At one point this worked. Sort of. There was at least a method to the madness. Eventually, it became clear that while it may have been working, it was only working well enough to get me by – not well enough to move me forward.

I had all the information I needed, but it was taking me way too long to find what I needed amid the clutter.

It was time for some digital housecleaning.

Since this is common problem, I assume many of you are experiencing or will experience the same thing. 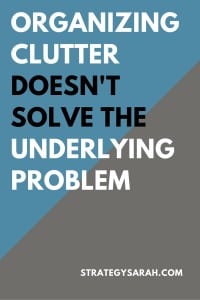 Here’s how I started:

1. Clean up and streamline a little bit at a time.

Based on my own past experience and from working with clients is that complete overhauls are much more likely to fail in the long term. My computer archives (and many of yours!) are littered with the dried bones of abandoned and half-implemented organization and filing systems.

Some of the time the systems never worked from the start. Other times, the systems worked well when first set up, but weren’t sustainable. (Side note: I love Debbie Roes’ blog, Recovering Shopaholic, and always gain insight that goes far beyond clothing. One of my favorite things Debbie talks often is that extreme changes backfire over time. Slow changes tend to be most successful in the long run.)

Getting rid of clutter does. I started with a few digital purges, and it felt great. Then I needed to clean up what’s left, get rid of some more clutter, and streamline a process that worked for me, at that stage in my life.

Come back next week and I’ll share my systems and tools ecosystem. (Hint: It involves Evernote). Interested in using Evernote as your organization system? I’m giving away a year’s subscription to Evernote Premium. Enter to win.

What’s the number one organization tip or advice that’s worked for you?

Do you use the Incognito Window in Google’s Chrome browser? Somehow I missed this for way too long after I started using Chrome.

The Incognito Window gets rid of all cookies, logins, or anything identifying you to a website. You’re, you know, incognito.

I use the incognito window daily, for all manner of reasons.

Three ways to use incognito mode

Using incognito windows saves time spent logging out of any and every app or site, and avoids, “Wait, which user am I logged in as?” or “Is that really what they’re seeing, or is that a setting on my end? 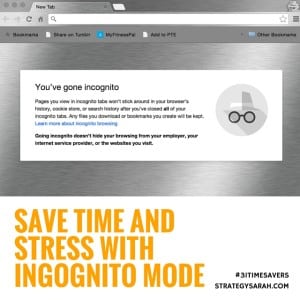 How can I tell if I’m in regular mode or incognito mode? When you’re incognito, you’ll see a sneaky dude in a hat and sunglasses in the right top corner of your browser window.

Have you used incognito mode? What other uses do you find helpful?

Quick, right now. How many web browsers and tabs do you have open? 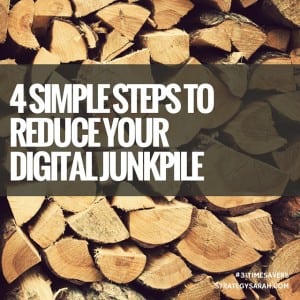 Why do you have that many windows open? Me, I have so many open tabs because there’s either something I need to do, something I am in the middle of, or something I want to remember.

Is this a problem? Maybe not for you. For me, open browser tabs and windows quickly turn into a digital junk pile, which doesn’t do anyone any good.

Tip for Google Chrome users: Did you know that you can see your phone browser history on your desktop computer? This is an easy way to view and address information quickly, then close the browser tabs on your phone. 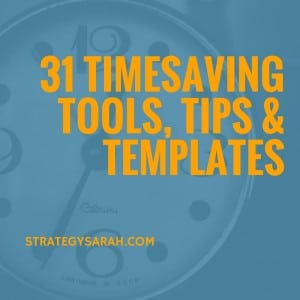